This had been the best beach in the Auckland area - until the perves got ignored...

The view north, toward Takapuna 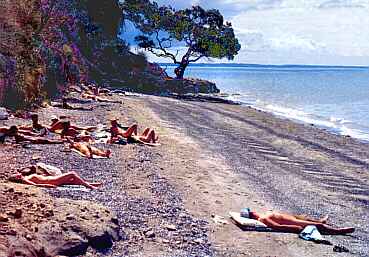 Next to St Leonards on the North Shore, Ladies Bay used to be probably the most popular of the Auckland urban options. (Despite a council-built viewing platform over the beach.) Of great concern to genuine Naturists is the reputation for bad behaviour there, Recently however (from 2011), it's possible that more well-behaved users have regained some control there...

We are serious about being absolutely family friendly!

If you see bad behviour at the beach, please advise the police directly with any associated car registration number and/or get an identifying photo - or advise us, if you prefer!

At the northern end of the popular Long Bay reserve is a marked cliff walk, which goes past this spot. There used to be a sign here, recognising it as a clothes-optional area.

This modest, south-facing stretch of sand is not far from the mouth of the Manakau Harbour. Access is via the obscure Con Bryan Track, entered about half way along, on the right of the short road to the look-out, near Huia. Don't sit under the cliff at the far end (at the centre of this picture), because bits of it often fall off there...

Orpheus Bay, near Huia on the upper side of the Manakau Harbour 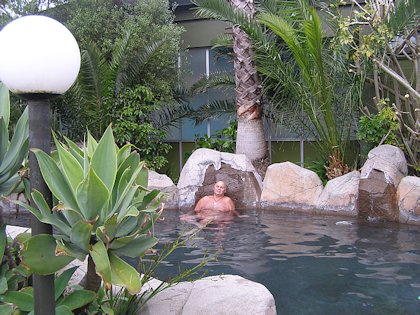 This spa is at 150 Parkhurst Road, Parakai, near Hellensville (420 8998). Skinny-dippers are welcomed on the first and third Friday of each month (10am to 10pm). The private area is only comfortable for about 25 people, so booking is a good idea. (FBNZ members can get a 25% discount, on showing their membership card.) 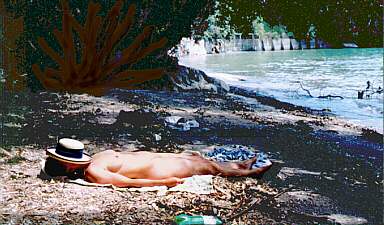 Only about three kilometres from Ponsonby, this is not a big beach but usually there are a few people on it, despite it's proximity to the CBD. Here, the tide is right in - there are more sunny areas than appear here.

Herne Bay, a quiet respite in the big city

On the way to Helensville from Auckland, at the end of Rimmers Road, is a long, west coast beach. It can be a bit bleak at times, but even on a busy day, there's plenty of room. 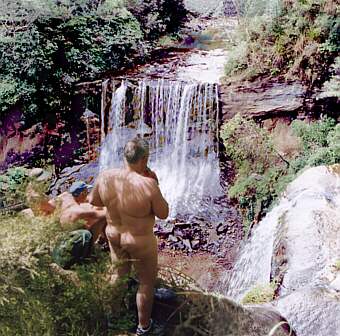 The falls are (geographically) half way between the settlement of Murawai Beach, and Waitakere Village (township) in the west of Auckland. (To drive nearest to here, go via Wairere Rd, then Horsman Rd to the end.) Walk for 30 minutes on the well-marked track. There are several walking tracks to try, including one along the stream.

The view from the top - only a short walk down for a dip. 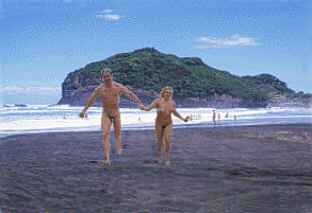 These beaches are next to each other on Auckland's West Coast. Bethells has the car park behind it. Skinny-dippers tend to go either to the south, the area shown here, or north over the saddle to O'Neills - (see next). 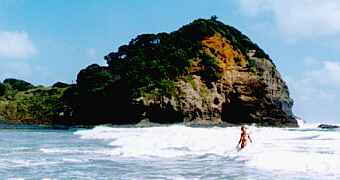 Getting to this beach needs that extra trek over the saddle: possibly heavy-going for small children. On top of that, there could also be a bit of a wade if you're there within an hour of high tide.

O'Neils Beach - Bethells is behind the saddle on the left

Turn left about 15km along Piha Rd to go to Karekare instead of Piha. There are a number of walking tracks behind the west cost beaches, some of which go by pretty lakes and streams.

Karekare Beach, with the top end of Whatipu in the background 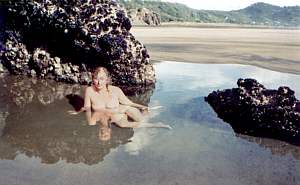 At the bottom of Piha Rd turn right and go to the last car park to the north. The track over the point to Whites Beach starts, is near here. (Note that ex-Mayor Bob Harvey welcomes clothes-optional use of Piha...)

A North Piha rock pool, with the middle of Piha behind

The usual way to get here is via the track over the point at the northern end of Piha Beach - about a 30 min walk. 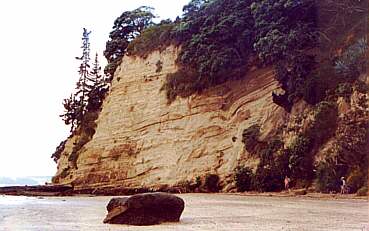 This one is reasonably easy to find, being not too far from the Howick shopping area. The spot used though, is a good walk to the right from the main beach and parking area. Since the council removed a shielding Pohutukawa log some years ago, there seems to have been a slow decline in usage...

The Mellons Bay spot, about 400 m from the main beach area 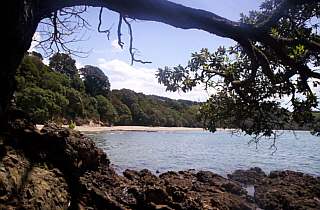 On the east coast, apart from Ladies and Mellons Bays, one has to venture about 15 to 20 km further east, past Clevedon to find Waitawa and Tawhitokino. Otherwise, of course, there are always the Islands in the Hauraki Gulf!

Tawhitokino, a quiet respite well away from the big city