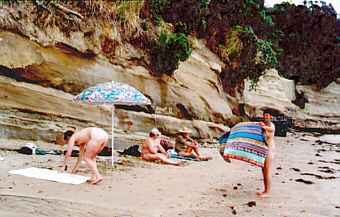 In June 1992 the North Shore Council passed a bylaw which proscribed "exposure of the pubic area to others" if you were over twelve. This was labelled 'ultra vires' (essentially: invalid) by a civil liberties barrister, in 1994.

In late 2003, at a meeting between the council and the Natural Friends' Network (now amalgamated with FBNZ Inc.), the police brokered an agreement where, for bylaw purposes the meaning of 'exposure' would apply to any naked person nearer than 50m to a beach access point, or less than 30m from in front of 'others' - ie: those passing, who are dressed.

St Leonards Beach during a time of negative publicity

Since then, though, a couple of the council staff have been hell-bent on intimidation of any Naturist they can find; issuing a trespass notice if anyone dares to disobey the Beach Patrol Officer's order to dress. This exercise has been facilitated by the local Community Constable, backing a council officer's line that (regardless of legal precedent against it) any nudity at any beach must be crushed at any cost.

However, following the election of Andrew Williams as Mayor, things settled down.

Warwick Robertson, the council's 'ByLaws Officer', keeps asserting that St Leonards needs to be available as a 'family beach'. (So we had to keep reminding the council that we regard all beaches as family beaches!)

Since the consolidation under Auckland City, no problems have been reported.

For a map and more detail.